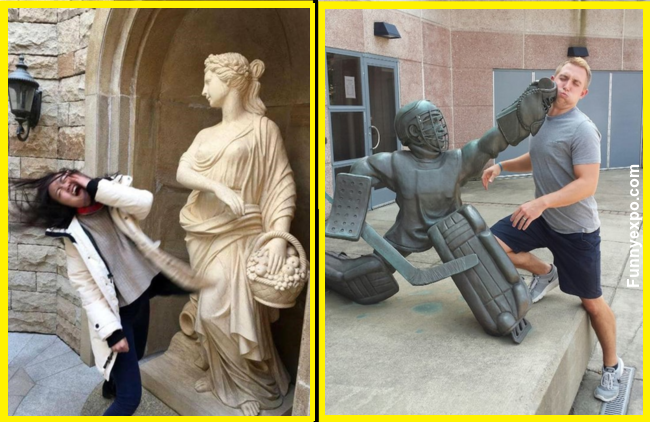 We have brought to you 20 hilarious pictures of people with statues:

If you see hilarious pictures of people posing with statues and you will try to see them again and again. As we all know that statues are made in parks and public places and there are some such statues. Which is a legend for any country, who have significant contribution for the country and make statues to remember such people. The people click pictures by funny moments with statues, so that these pictures feel real. And at the same time, we promise you that you will enjoy this picture of people with statues and a smile on your face.

In today’s modern times, the users of the phone are increasing day by day as the user of the phone increases, the habit of clicking picture is also increasing among the people. And it is true that to click a good picture, people do not hold back from buying expensive phones. During this time, people make fun of themselves for imprisoning themselves in the picture and imprison themselves in the picture through a variety of funny activities. Such moments become laughter moments for everyone, and anyone who sees such pictures once, wants to see such pictures again and again, some such pictures we have come about for you. After viewing these pictures, you will have the most important chance that you can share these pictures to your friends and relatives. So that your friends and relatives can also enjoy these pictures. So why are you waiting, quickly share these pictures And we will also tell you with each picture what you will feel after seeing the picture.

A girl is seen kicking the statue

A boy is seeing fighting with two Gentlemen statues

It looks like a statue is eating a woman’s feet

A girl hangs on the bag of the statue

In this picture, it is felt that an statue hit a boy with a baseball bat leaving all his paper from hand

A little girl playing with a little baby statue

Spiderman statue grabbed a person by the neck

Looking at this picture, it seems as if a statue has slapped the boy vigorously

Looking at this picture, it seems that a big statue is holding a small child statue with both his hands and pulling it. To save the little girl statue, Helping with each other